POSTED 10th April 2021 – The Lodge and its Members were saddened to hear of the passing to the Grand Lodge above of HRH The Prince Philip Duke of Edinburgh. HRH was a member of the Navy Lodge 2612 for Commissioned Officers of the Naval Services and had been a subscribing member for the last 68 years. Our sincerest condolences to Her Majesty Queen Elizabeth.

POSTED 20th March 2021 – So Brethren here we are some twelve months give or take since our last formal meeting and still no date as yet to a return to normal service.  It has been a blessing to be able to meet virtually which has allowed us to keep in touch and provide support and assistance if needed.  Sad times as well. Having lost our beloved Secretary and seen two other loyal and respected members pass to the Grand Lodge above.  Still we must look forward initially with thanks for the two Senior Brothers who fell foul of Covid-19 but thankfully are still with us.   We are fortunate to have several new prospective members in the wings and hopefully on our return we can initiate them into this wonderful Society.

POSTED 22nd September 2020 ( thanks to W.Bro. John Franklin for his input into this bulletin) – Today is a very special day for the Lodge as it celebrates its 75th anniversary.  It was the Lodge’s original plan to have a special meeting and festive board to celebrate. However, as that great Freemason Robert Burns once said:  “The best laid schemes of mice and men oft go awry, and leave us nothing but grief and pain, for promised joy”.  In these very trying and testing times we have to find other ways of celebrating and tonight through the medium of “zoom” we will raise a glass at 20.00 hrs to the Lodge and its members past and present.

Bedford Castle Lodge No 6124 was Consecrated by the Provincial Grand Master on 22 September 1945 at Newnham Rooms, the first permanent Masonic Temple in the Province.  It was formerly St Cuthbert’s Parish Hall. The Founder Master was RW. Bro. Dr C. H. Perram, PGW, and the Founder Senior Warden W. Bro Reginald Crewdson, LGR, whose son  R. J. (John) made the ballot box, columns, gavel handles and alms collecting boxes whilst home on leave from the Army.    The remainder of the tools were all made by members of the Lodge from solid natural oak.

The Lodge was sponsored by the oldest Lodge in the Province Stuart Lodge No 540.  At the time of consecration the Membership totaled 24 which is a similar number to that of today.

POSTED 5th May 2020 – It is no exaggeration to say that all the Brethren have missed the opportunity of meeting at our monthly gatherings.  However thanks to the efforts of several Brethren we have held virtual meetings via “Zoom” including general chats and quiz nights.  At present we have no idea when the Government and the United Grand Lodge of England will deem we can return but as the season has now finished we all hope that decision will be made in time to organise for October – keep safe

POSTED 19th March, 2020 –  Due to current siutation with the coronavirus and guidance issued by UGLE there must be no lodge meetings for the next 4 months this in essence means we will close for this Masonic year re-opening in October.  Everyone keep safe and well.

POSTED 10th February, 2020 – During a recent visit home to Australia one of our Brethren presented the Master of his mother lodge “The Hills No. 1024” with a retro pin to celebrate this Lodge’s 75th Anniversary due in September this year.  The Master can be seen wearing said pin.  Proving Masonry is universal. 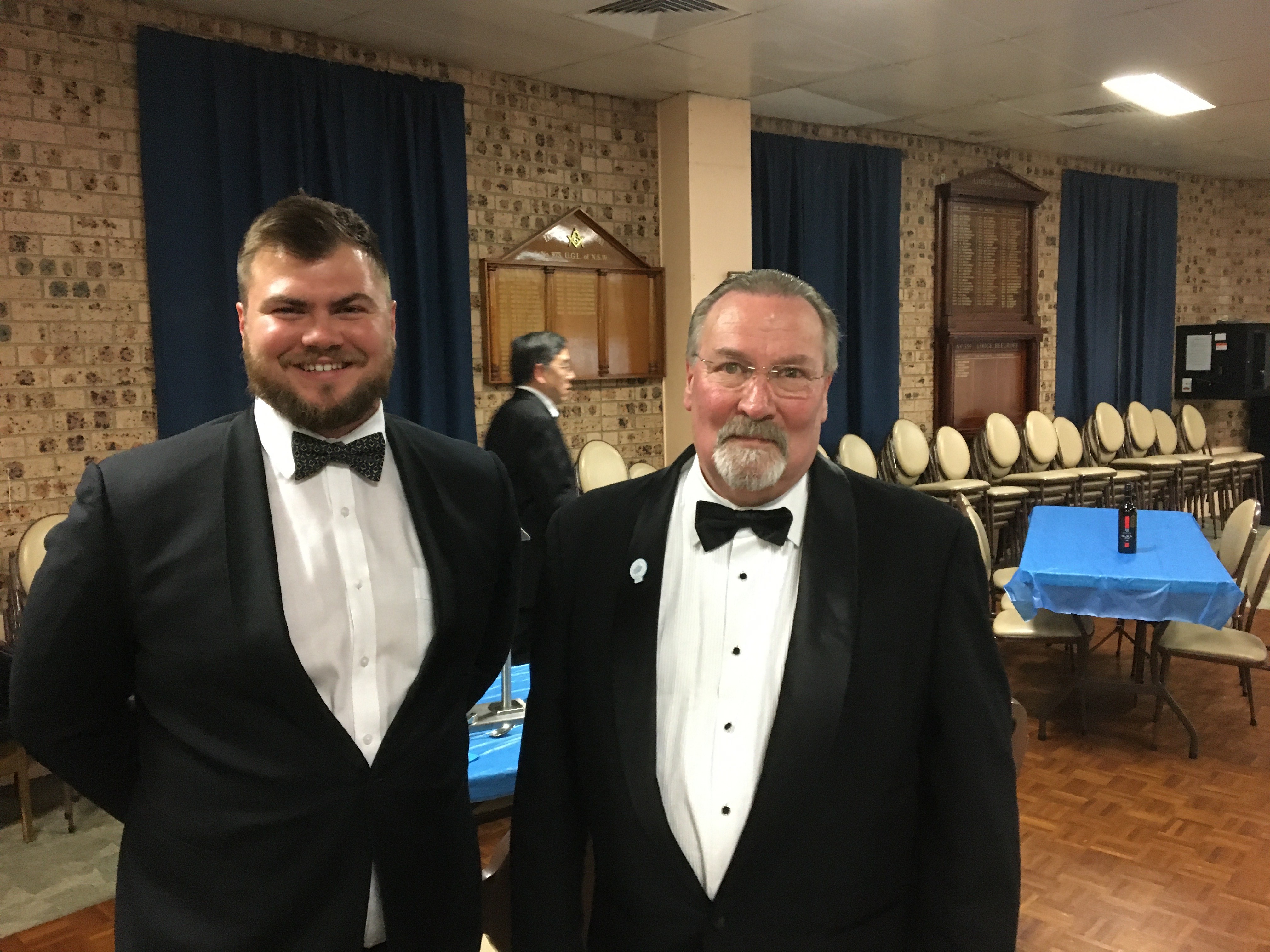 POSTED 2nd February 2020 – For the second year the Lodge held a Burns night celebration as part of its Festive Board.  This is becoming so successful it seems this may become an annual event.  Many thanks to those who assisted.   Burns Night, celebrated on his birthday, 25th January, has become the second Scottish National Day, and is celebrated with Burns suppers around the world. The celebrations start with a general welcome and announcements, followed by the Selkirk Grace. Then the haggis is piped into the room and around the table, before the reading of the famous Address to a Haggis after which it is cut open and served, with neeps and tatties (turnip/swede and potatoes). During the meal, Burns’ Immortal Memory and other poems are read, toasts are proposed and drunk and the evening concludes with the singing of “Auld Lang Sein”. 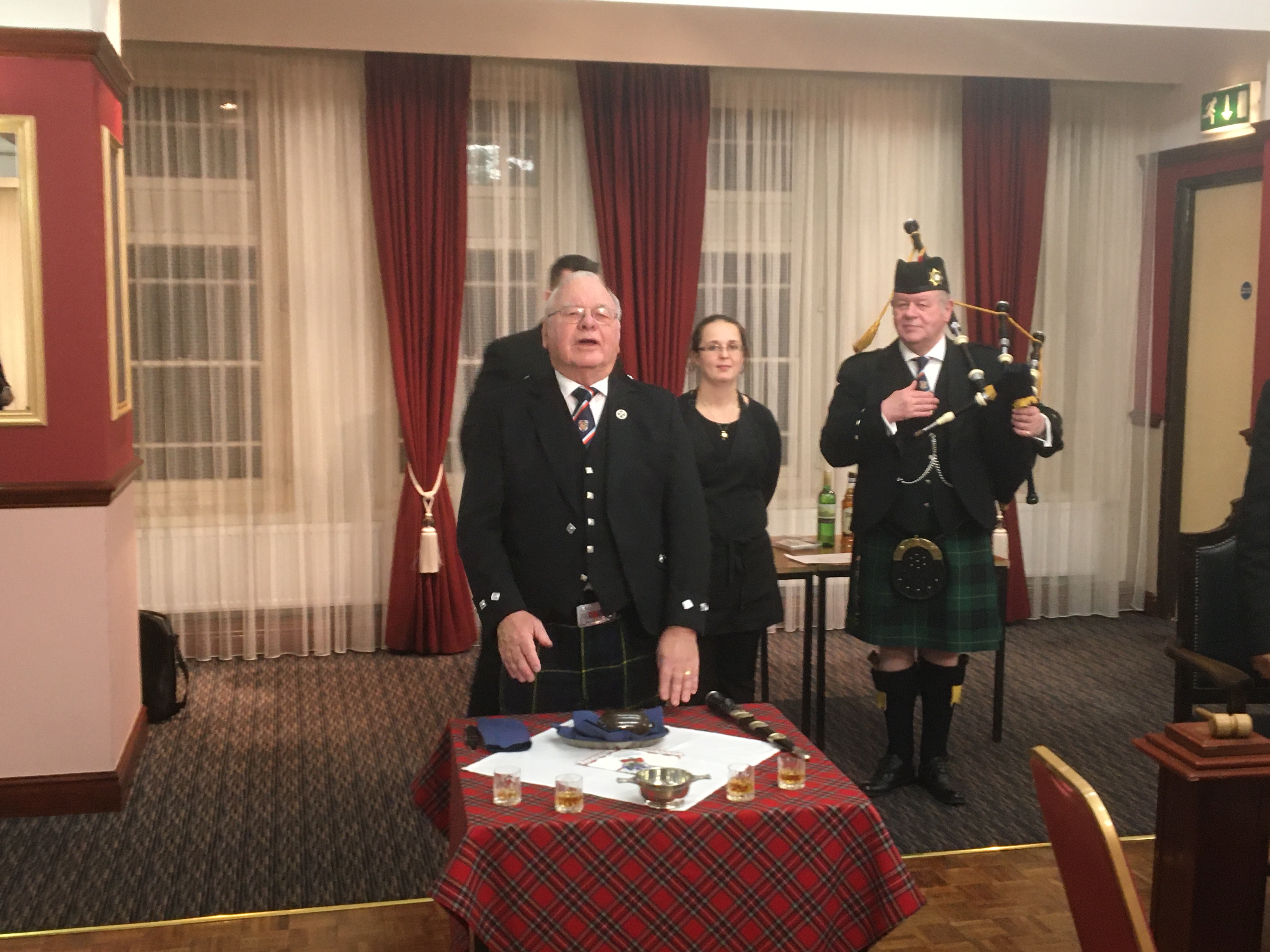 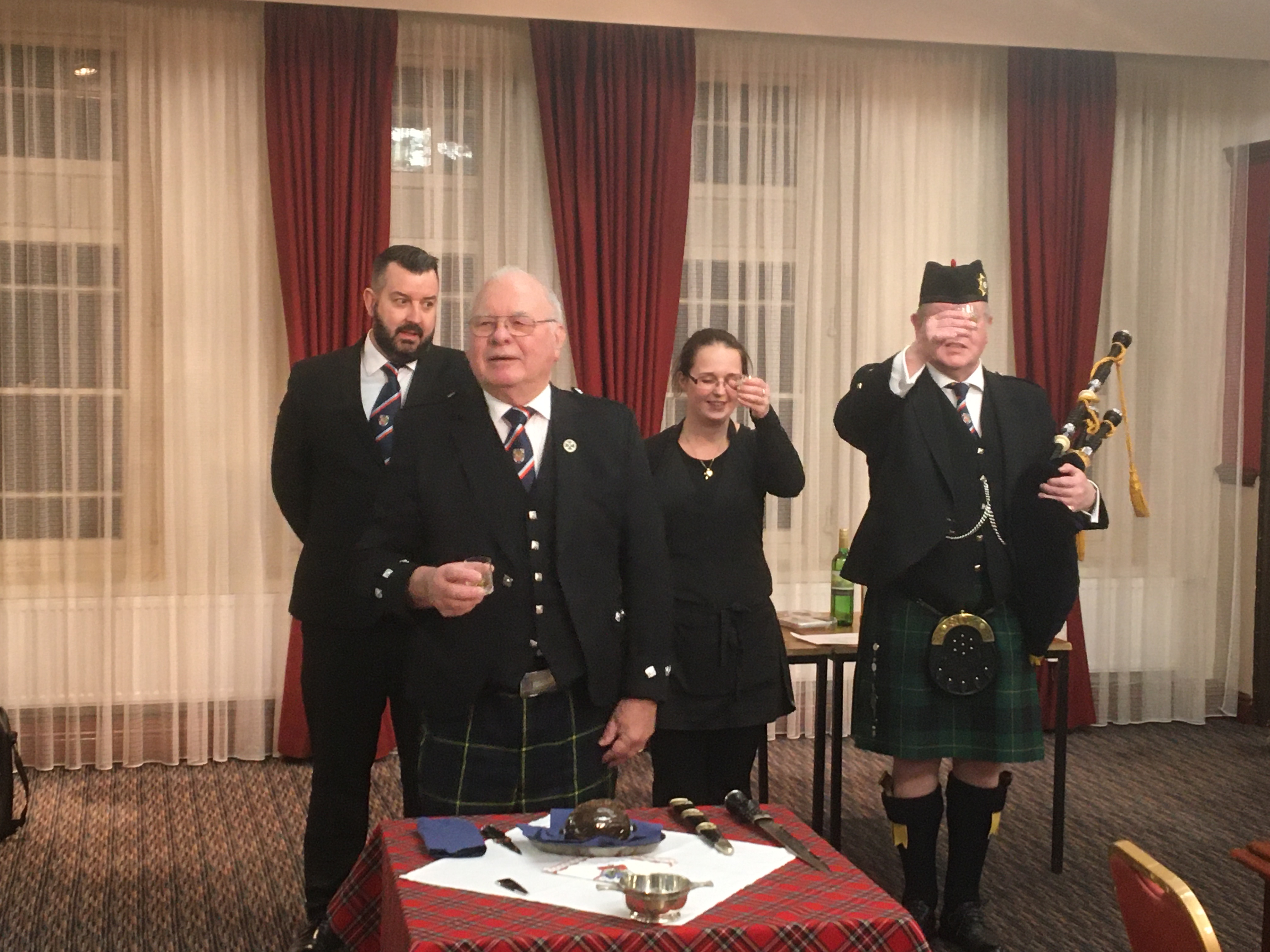 A brief history of the man and his time as a Freemason is posted below. Rabbie Burns was Initiated as an Entered Apprentice at Saint David’s Lodge in Tarbolton on 4th July 1781, when he was 22, and Passed and Raised on 1st October, the same year. When this Lodge became dormant, he joined the Kilwinning Saint James Lodge, No. 135, and the minutes for 1784 show that he was heavily involved in Lodge business, attending all nine meetings, Passing and Raising Brethren, and generally helping to run the Lodge. In 1785, he was appointed Deputy Master, and between 1784 and 1788, his Lodge met 70 times. He was present at 33 of those meetings and occupied the Master’s Chair at 25 of them. He was exalted a Companion of the Royal Arch in May 1787 at the St. Ebbe’s Chapter in Eyemouth, and in token of their esteem, the Companions unanimously agreed to waive the usual admission fee. Over time, his fame grew and at a meeting of Lodge St. Andrew in Edinburgh in 1787, the Grand Master of Scotland, proposed a toast
POSTED 15th July 2019 – Several lodge members and guests attended a summer lunch on Sunday 14th July at Wyboston Lakes Hotel.  In a relaxed atmosphere all enjoyed a good lunch. 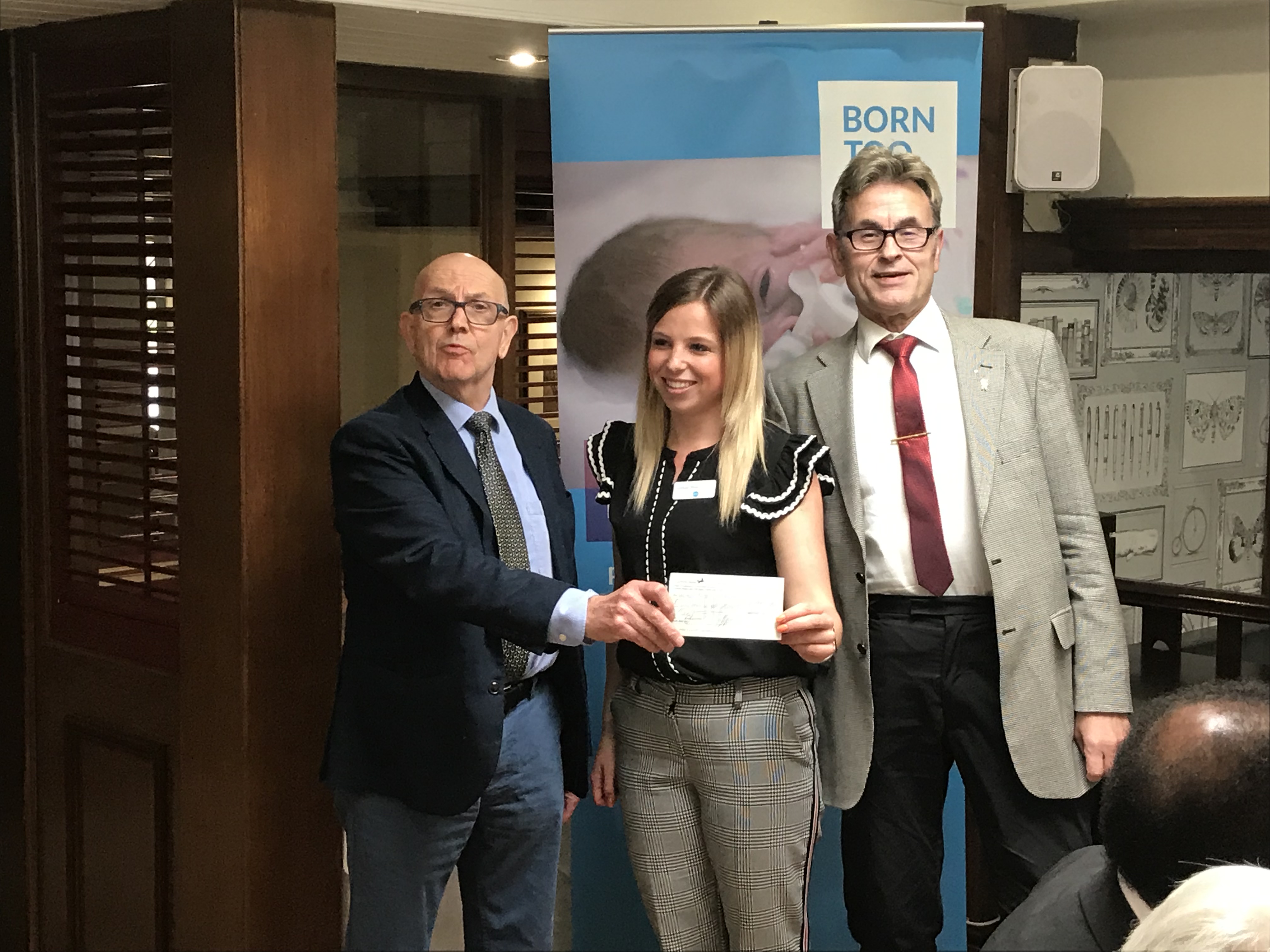 POSTED 8TH APRIL 2019 – The annual Spring Lunch held on 7th April 2019 at the The Barnes Hotel in Bedford for Members, families and guests was enhanced by the presence of Lyndsey Wood  Fund Raising Manager for Action Medical Research.  This Charity is being supported this year by our Worshipful Master and the Lodge and raised £1000.00 from the raffle, donations and auctions held at the function.

A total of seventy people consisting of members, family and friends. attended.  Pictures show Our Worship Master and Charity Steward presenting the cheque with the Toast Master watching on.  Later the Toast Master is seen auctioning a Teddy for the Tender Loving Care Appeal.